Currently In The Richmond Gallery


The Virginia and Howard Richmond Gallery offers regularly changing exhibits ranging from stories of the communities that were once part of Ocean Township to interesting aspects of local history. This Gallery is named in honor of Howard (Doc) and Virginia (Ginny) Richmond, for their years of dedication and service to the Museum and its work.

"After World War II: How a War Changed a Nation" 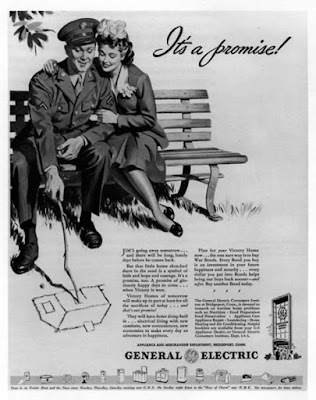 The GI Bill helped veterans returning from the war afford a home.  The automobile and expanding highway system gave them the mobility to move outside the city. Techniques for mass-producing houses, pioneered by Levitt & Sons, helped meet the demand. The result was a massive shift from urban to suburban living.   Image from the State Museum of Pennsylvania.

After World War II: How a War Changed a Nation
Eden Woolley House, 703 Deal Road, Ocean, NJ 07755
June 27, 2021, to June 2022
America emerged from World War II poised for profound change. Between 1945 and 1960, the ranks of the middle class ballooned. The suburbs sprawled. The economy and the population boomed.  Cars took over. So did television. Mainframe computers entered the commercial market. The U.S. Supreme Court ruled segregated schools unconstitutional. An Iron Curtain split the world between Super Powers, and school children hid under desks in “duck and cover” drills to prepare for an atomic attack.
A new exhibit,  “After WWII: How a War Changed a Nation,” opens at the Eden Woolley House in June.  It makes the case that the seeds of this radical transformation of our culture, economy, politics, and technology were sown by the war.
Pre-war America
A reminder of where we were before the war puts the changes that followed in perspective. When Pearl Harbor was attacked, December 7, 1941, the country was still in the grips of the Great Depression.  The unemployment rate hovered near 15%.  The watchwords for most families were “Use it up, wear it out, make it do, or do without.”
Nearly 60% of the county’s 132 million people lived in cities.  Keeping house and making meals were labor-intensive and time-consuming. For all but the wealthy, there was little leisure time.  When families relaxed at the end of the day, it was the radio that entertained them.
The necessities of war
On December 8, 1941, the U.S. declared war against Japan and three days later against Germany and Italy. The nation mobilized. Factories were converted to wartime production. The military ballooned and by the end of the war, more than 16 million men and women had served.  The government invested in the research needed to provide a technical edge—including the development of the atomic bomb.
On the homefront, women entered the workforce in record numbers, taking over for men who were off fighting. They kept the factories, businesses, and farms running. Families coped with rationing and lived with scarcity.
The government encouraged Americans to save and urged them to buy war bonds. In 1945, Americans were saving an estimated 21% of their disposable income.
The aftermath
When the war ended, conditions were right for an economic boom. American families had built nest eggs and survived years of doing without. Millions of demobilized veterans returned to civilian life, supported by the provisions of the GI Bill, ready to enroll in school, start businesses and families, and buy homes.
Fueled by pent-up needs and newly available funds, spending soared. 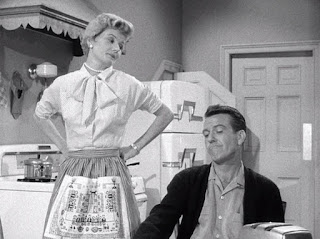 Leave It To Beaver (1957-1963) was among a genre of sitcoms (Father Knows Best, The Donna Reed Show, and others) that depicted the post-war feminine ideal. Here June Cleaver, in pearls, shirtwaist and apron are shown in her proper place—the kitchen.

Factories quickly retooled and began producing refrigerators, vacuums, and all manner of consumer products. Many of those products went into new homes in the burgeoning suburbs. Levitt & Sons, who had applied Ford’s production line innovations to home construction, were building up to 36 houses a day and showing others how. Young (white) families were driving their new cars out of the cities to take up residence in housing developments springing up across the country.
Those homes were soon filled with children. In 1946, 3.4 million babies were born in this country, 20% more than in 1945. The trend continued.  By 1952, the number was 4 million--and stayed at that level every year until 1964 (by which time, “baby boomers” made up close to 40% of the U.S. population).
Groundwork for reform
The aftermath of the war meant jobs, homes, prosperity, and opportunity for many.  But not all.
More than one million African Americans served in the wartime military—a segregated military.  At the start, Black soldiers were restricted to support roles. As casualties mounted, they moved to combat positions; the Tuskegee Airmen are a heralded example.
Black veterans who had served with distinction returned home to segregation, discrimination, and limited opportunity. Conditions their war experience made even more intolerable. Many became civil rights activists and escalated the pressure for reform.
Their efforts were joined by others and produced meaningful, if limited, change:

• In 1948, President Harry Truman ordered the desegregation of the military.

• In 1954, the U.S. Supreme Court outlawed segregation of public schools—a decision some consider the start of the modern Civil Rights Movement.

The war also had complex ramifications for women, who had joined the military and taken on the jobs and responsibilities vacated by men off fighting.   Nearly 350,000 women served in uniform.  An estimated six million joined the civilian workforce, many in positions of considerable responsibility and authority. Women, whether in the workforce or not, proved themselves independent and self-reliant.
When the war ended, working women were expected to vacate their positions to make way for returning (male) veterans.  As the population migrated to the suburbs, women were expected to take their place in—not outside—the home.  Rosie the Riveter became June Cleaver.
But the female empowerment displayed during the war was not dead.
Despite the changing norms, many women continued to work outside the home although opportunities beyond nursing, teaching, and clerical work were limited. “Modern conveniences” freed time. Educational opportunities expanded. In 1963, Betty Friedan published The Feminine Mystique, to many the catalyst for the modern feminist movement.
More to the story
The exhibit opening in June doesn’t stop there.  It explores the new global political order, the Cold War, the Space Race, the technologies that evolved to reshape how we live, the new youth culture, and more.
Home
Subscribe to: Posts (Atom)
GET INVOLVED
The Museum is an all Volunteer Organization. We are always looking for help with projects, our many events, or just staffing the Museum. Checkout our needs and Get Involved

Township of Ocean Historical Museum
The Township of Ocean Historical Museum, founded in 1984, is a member-supported, 501 (c)(3) non-profit organization, incorporated under the laws of the State of New Jersey. Its headquarters, the Eden Woolley House, is one of the few 18th century structures still in existence in the Township. The museum serves as the ancestral home to every citizen of the Township of Ocean. PLEASE NOTE: At the present time, due to the current COVID-19 pandemic, the Museum will only be open on all Sunday afternoons, from 1:00 pm to 4:00 pm, or request a tour anytime by Calling 732-531-2136 or e-mailing at OceanMuseum@yahoo.com. We will be adding days in the future and will continue to keep you advised. The Township of Ocean Historical Museum offers exhibits on the history of coastal Monmouth County and a full calendar of events. The Museum is also 100% volunteer supported, with no paid staff. The Museum maintains a library and archive, which houses manuscripts, books and photographs of historical and genealogical interest. For more information, please call 732-531-2136 or visit our website at https://www.OceanMuseum.org